Andrew forgot his camera so he had to make due with photos from his phone.

The Johnston Lake parking lot is located at the end of a two kilometre access road from the southeast edge of the Lake Minnewanka Drive loop, just a few kilometres from the Banff townsite. There is a massive parking lot which was only partially full when we arrived just after 10am, but was packed and vehicles were overflowing and parked along the road within a couple hours.

Johnston Lake is situated on the southern slopes of Mount Inglismaldie and Mount Girouard in the Bow Valley, on a bench above the Trans-Canada Highway. It appears to be a natural lake that has been dammed at both ends to raise the water level. It’s about a kilometre long and about 50 metres wide. There’s a small sandy beach on the northwest end of the lake nearest the parking lot, and ample locations along the north shore for great photos of Mount Rundle.

We hiked along the shoreline trail, circumnavigating the lake in a clockwise direction. There is also a second trail about 30 metres upslope on the north side of the lake, and another trail further south of the lake - and they all seem to join at the east and west ends of the lake - so there are multiple options for hiking around the lake.

It was a fairly calm day with great views of Mount Rundle and Cascade Mountain from the lakeshore. There were a number of kayakers and some stand-up pattleboarders on the lake. It also seems like there’s a good spot to jump into the lake and go swimming on the south side as there was a group we passed that seemed to go for a splash!

We stopped at the southwest end of the lake at a picnic table to have a snack before finishing our hike across the outfall bridge and back to the car.

We drove along Lake Minnewanka Drive for a few minutes to the lower slopes of Cascade Mountain to get to our second hike of the day, to the Bankhead Train (http://www.shawnbenbow.ca/bankheadtrain2016). 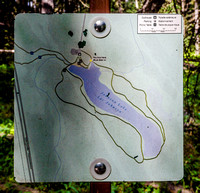 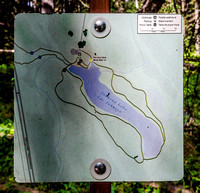