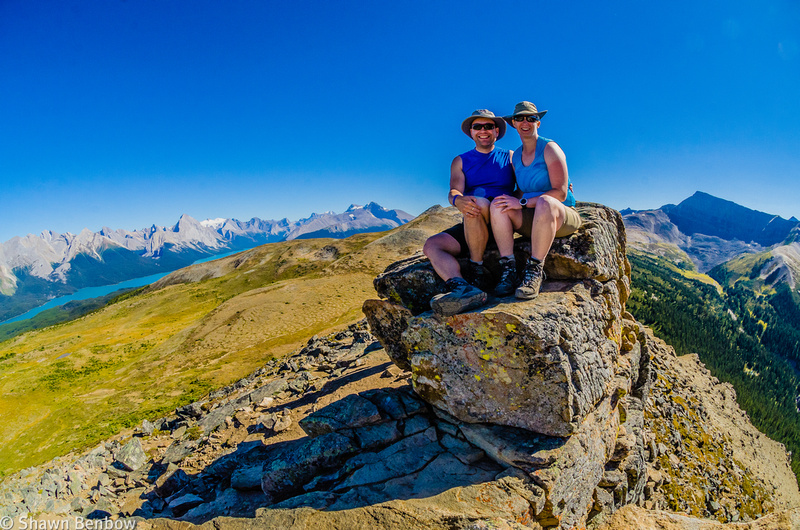 Shawn and Jenn on the second summit of the Bald Hills.

On the Labour Day long weekend we drove west to get a couple hikes in Jasper this year. Instead of the usual long weekend backpacking trip, we decided to camp at the Wabasso front-country campground, about 16km south of the Jasper townsite. (www.​shawnbenbow.​ca/​jasper2013)

On Sunday, the weather was fantastic and the forecast was for sunny and hot, so we made our way to the Bald Hills, a hike that we had been looking at for a couple years but had never attempted in the Summer. Just last January we went up on snowshoes (www.​shawnbenbow.​ca/​baldhillssnowshoe) to just above the old fire lookout (hitching post), so we wanted to see what it was like in the summer time.

After the first two and a half kilometres, the trail splits. The northern route follows the old fire road to the old fire lookout site (where the hitching post is). The western (left) route goes up a shortcut through the trees. The shortcut is shorter, but much steeper.

On the way up we choose to hike up the old road, and in doing so we caught glimpses through the thin forest to the Maligne Range to the north, which is the southern end of the Skyline Trail. After reaching the hitching post, we ascended the steep slope to the first summit of the Bald Hills. The area is aptly named, as the first peak is treeless and relatively flat.

The trail continues south along the ridge and drops into a small meadow. We did not continue south, but there is a well-used trail that ascends another ridge south of the second Bald Hills summit. We choose to begin the descent east of the Bald Hills, back to the hitching post.

From the old fire lookout we descended along the 'shortcut' trail back to the old road, and then made our way back to the trailhead. 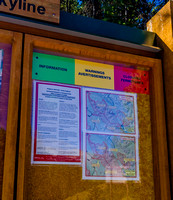 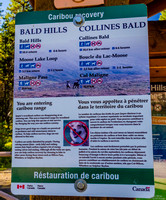