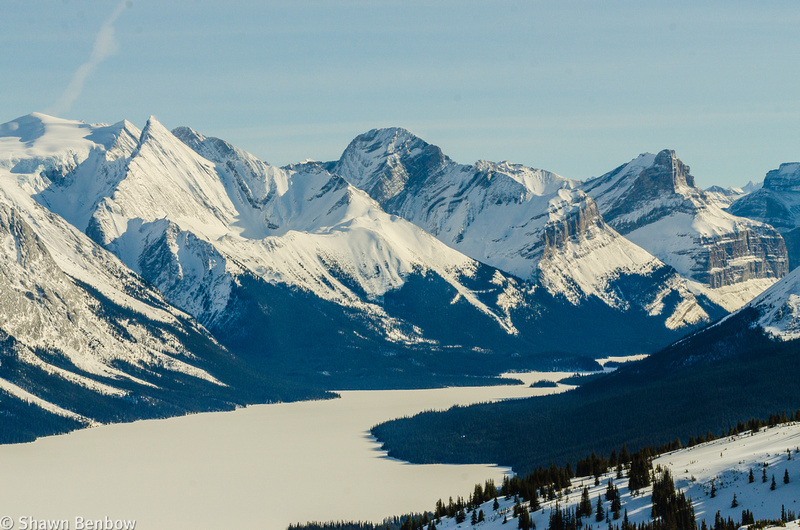 Spending a weekend in Jasper is a bit of a treat for us. We spent Saturday downhill skiing at Marmot Basin (photos here: www.shawnbenbow.ca/marmot-feb2013). The weather was a combination of sun and snow all day long, so we were a bit concerned that storm was going to blow in overnight.

Lucky for us, it was a bright blue day when we awoke on Sunday morning. It was a bit cooler than forecast, at about -14C, but it was supposed to warm up to close to zero. So, off we went!

We had looked at the Bald Hills trip a few times, and had planned on doing it a couple times in the summer. For some reason or another (likely weather), we hadn’t ever been up there. So, now that we had a beautiful February day, things were looking up for us!

The trailhead is at the end of the Maligne Lake Road, about 50 kilometres from the Jasper townsite. This is also the start of the Skyline Trail, which we have never done but want to do.

The Bald Hills Trail follows an old road through the forest for the first few kilometres. The views are not particularly inspiring, but it was fast along the well-used trail. At about 2.8km the trail splits. The road continues at a moderate grade to the right (north) while the ‘shortcut’ trail, which is shorter but steeper, leads left (west). On the way up we took the longer but less steep route up the road. After another junction, this time with the Evelyn Creek Skyline connector, the views started to open up. We could see north to the Maligne Range where the Skyline trail traverses, and west toward Mount Hardisty.

The trail rounded out over a ridge and turned back east to a hitching post with decent views of the Maligne Valley. There used to be a fire lookout somewhere around there, but with the snow we couldn’t see if there was anything left of the lookout. Apparently you can ride a horse up the trail to this point, but must continue on foot if you want to go further. We had a bite to eat while taking some photos, and were visited by a Whisky Jack that wanted to share our food with us.

From the hitching post we continued south across a small drainage and then began another ascent up a sparsely treed slope. About halfway up this last slope we decided we had gone far enough. Up to the hitching post the avalanche exposure was basically non-existent, but as we got higher the slope got steeper and felt less supportive. When the snow started to pinwheel, we decided we had gone far enough. The views from this slope were absolutely fantastic, especially because it was such a clear day. We could easily see the 20+ kilometres to the south end of Maligne Lake.

We took the ‘shortcut’ on the way down, but since we hadn’t come up that way we weren’t sure which of the many trails to take. We followed some decently defined ski tracks for a while, then ended up trailbreaking a new trail until we intercepted the main route. On the way, Shawn fell into a tree well, and struggled to get out because the snow was probably close to two metres deep. Jenn followed, taking a different route to try and avoid the soft spot, but found another tree well for herself. Thankfully we found the main packed trail shortly thereafter. From then on, it was a quick walk back down the road to the trailhead.

With minimal avalanche exposure, this is a great trip with fantastic views. However, Jasper National Park may be closing access to the Maligne Lake Road in the winter, so there may not be future opportunity to explore this area.