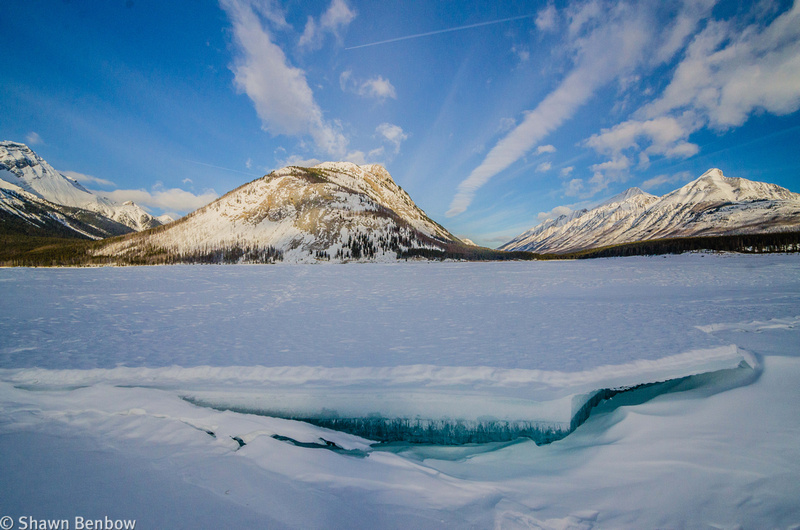 A big chunk of ice visible from the trail.About halfway across the lake we crossed an island or ridge that had some trees and other vegetation on it. As we were descending back down to the lake level, we found this piece of ice. It might have been blown to shore before the whole lake froze, or perhaps it moved when the lake level changed. It was pretty neat to see!

On a nippy -16 degree morning in January, Bruce joined Jenn and Shawn on a snowshoe at the south end of the Spray Lake Reservoir. Our original intent was to go to go up the Mount Fortune west ridge. However, after a long day skiing at Sunshine Village the day before, we quickly realized that a decent hike across the lake was enough for the day.

We began at the Mount Shark Trailhead, a location we are becoming very familiar with - within the past year we had hiked to Karst Spring beginning at the Mount Shark trailhead, and this was also the end point for our seven day Mount Assiniboine backpacking trip. The parking lot is well cleared in winter as this is a very popular location for cross-country skiing.

We began along the "Watridge Lake Trail," an old road that works its way west from the parking lot. The trail is groomed and trackset with two cross-country ski tracks, and it looks like it would be a nice place to ski. Being on snowshoes today, we weren't able to take advantage of the grooming, and walked alongside the nice fresh tracks.

Our first goal was to get from the old road down to the lake shore. This isn't an easy task, as the cross-country ski trails meander every which way, and don't ever reach the lake. The trail description in Andrew Nugara's Snowshoeing in the Canadian Rockies book says something along the lines of: follow the Watridge lake trail, turn right at the first junction, ascend a hill, and turn left and descend through the trees to the lake. We didn't find it that easy. We went up, down, right, left, too shortcuts between a couple track-set trails, and then when we were really getting frustrated, found a bushwhacked trail that finally lead down to the lake. In all, it was close to 30 minutes to reach the lake.

Once at the lake, we walked in a well-defined trail along the shore until a set of tracks took off across the lake toward Mount Fortune. That's where we wanted to go, so we followed those tracks. Across the lake, the snow was pretty terrible. It was up to a half metre deep of granular faceted snow that was not supportive at all on top of either hard slabs or lake ice, depending on how the wind had blown across the lake. To make it more difficult, in places there were hard windblown slabs that were sometimes, but not always, supportive. So, there was a lot of sinking and trudging through the snow.

The skies were so clear and crisp that we could see the mountains for kilometres around, and the 360 degree view from the lake was absolutely stunning. Even though we didn't gain much elevation, on a clear day this trip is well worth it just to get partway across the lake to take in the scenery from a vantage point you can only access a few months a year!

Partway across the lake there are a few small islands or peninsulas from the south end of the lake, and our route took us over some of these landforms. That's why some of the photos have trees and shrubs in them! About 4 kilometres from the trailhead, we reached the far shore of the lake at the base of Mount Fortune. We stopped to have some food and admire the scenery, and then turned around and made our way back.