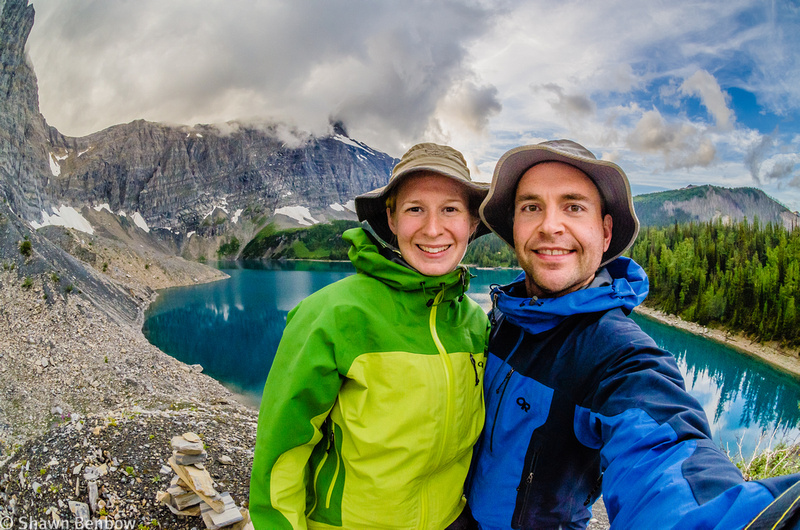 Jenn and Shawn on the south side of Floe Lake. Foster Peak is beyond the lake, in the clouds.

The second day we awoke to relatively clear skies, ate breakfast, and set off for Numa Pass. Due to a forest fire along Numa Creek, the Rockwall Trail was closed north of Numa Pass. However, we intended to only go that far, just to enjoy the view.

Unfortunately a storm and some rain blew in while we were ascending to the pass, so the view from the pass was somewhat obscured. However, the flowers and vegetation along the way were a spectacular sight, and we were able to view Floe Lake from above, which was impressive even with the clouds.

When we returned to the campground, we retired to the tent for a mid-afternoon siesta and to play crib for a while. When the weather cleared a bit, we made ourselves dinner without getting too wet. Somewhat surprisingly, the weather improved over a few hours in the evening.

After dinner we still had a couple hours of sunlight left, so we started walking along the eastern shore of Floe Lake. It was a relatively easy walk along the shore to the base of Floe Peak. We climbed over some glacial till deposited by old glaciers, and enjoyed a fantastic view of Floe Lake from the south side. We also made a short side-trip east to a viewpoint near the head of Floe Creek. The best we could tell is that Floe Lake bottom-drains somehow and the resulting groundwater emerges as Floe Creek a few hundred metres away from the lake. By this time, the clouds had lifted enough we were able to see mountains more than 30 kilometres away. It was a fantastic end to the day! 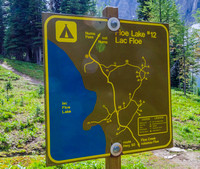