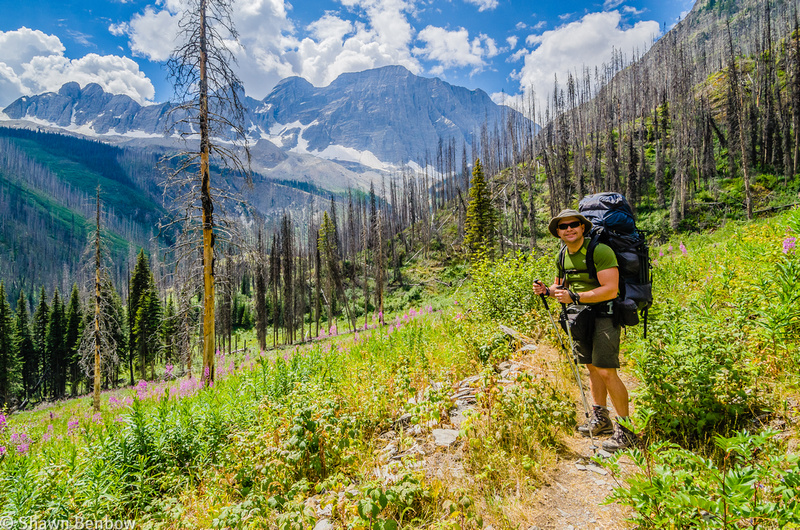 Shawn on the Floe Lake Trail.

The first day of our Floe Lake trip included the 5+ hour drive from Edmonton into Kootenay National Park, and after getting up absurdly early, we made it to the trailhead by just after 10am. The Floe Lake Trailhead is about one third of the way between the Castle Junction on Highway 1 and Radium Hot Springs on Highway 93 South.

The Floe Lake Trailhead is not at all obvious from the highway. The parking lot is through the trees, and only a small approach, overgrown with tall grasses, is barely visible as you drive along Highway 93. Even with the GPS beeping at us to make a turn, we almost missed the turnoff. I think a lot of other people drove right by and had to make U-turns to come back.


With the exception of the last couple of kilometres near Floe Lake, most of the trail travels through are burned in the 2003 forest fire. Some areas, particularly near the Vermillion River, have a significant number of trees growing among the tall charred remains of old trees. As the trail gains elevation, new trees are shorter, but there is still a significant regrowth of trees and bushes. Especially in and near avalanche paths, Fireweed grows like crazy. In some spots along the trail the ground looks purple from all the fireweed flowers!


After leaving the Vermillion River Valley, the Floe Lake Trail rolls west along the north side of Floe Creek (south side of Numa Mountain), crossing numerous avalanche paths and small forested areas. Just after kilometre 9, the trail reaches a scenic area with a view of Floe Creek cascading down a steep slope. At this point the trail turns right and begins the ascent up the Floe Lake headwall. There’s no climbing involved (it’s a good hiking trail), but the ascent gains 400 metres over about three kilometres.
There are few opportunities for views over the Floe Creek drainage as the trail ascends the headwall. However, much of this area escaped the 2003 forest fire, so there are some very large trees here. There is no water on this slope, and it was hot even in the shade, so it’s important to take lots of water along!


After cresting the headwall, the trail descends again toward Floe Lake and the campground. The Floe Lake Campground is situated at the northeast side of Floe Lake, with two separate eating areas, two outhouses (terribly maintained), and almost twenty campsites. Beware that there is a lot of elevation difference between the lake and most campsites, so the day’s elevation gains are not finished until you go to bed!


It was quite hot that day, and as there is very little shade along the trail, we were getting overheated by the time we reached the campground. We figured one of the best ways of cooling off was to go for a brief swim in the glacier-fed Floe Lake. It certainly was brisk, but the rocks along the shore were nicely weathered that it was actually pleasant to walk barefoot into the lake.


That night, though, the excitement didn’t end when we went to bed. See the last few photos (of the porcupine) to see what happened! 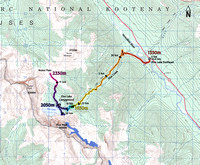 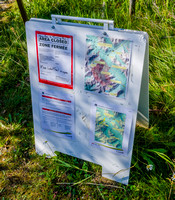