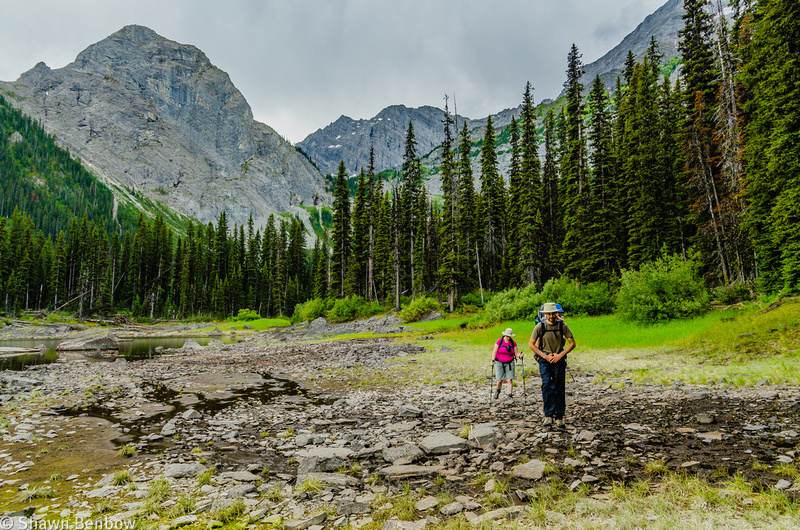 Jenn, James, and Andrew hiking along Warspite Lake, with Mount Warspite visible to the south.


Warspite Lake seems to have become an easy go-to for hiking and snowshoeing south of Canmore. Perhaps it’s the new Chester Lake? With Walter being only three months old, we wanted to get out and go somewhere with some scenery, but with minimal effort for the reward. We had actually only been to Warspite Lake in the winter (twice), so we figured we’d give it a go in the summer!

The trailhead is located about 50 kilometres south of Canmore on the Smith-Dorrien/Spray Lakes Road (Highway 742). Our friend Andrew met us in Canmore and we drove out to the trailhead, getting a reasonable start to the day considering we have a two year old and a baby!

The summer trail starts by heading northwest along the river to a relatively new bridge. I believe that there was a flood a few years ago that washed away the old bridge. The new one is very nice, made of fibreglass and wood - a variation on the older style steel and wood bridges. The winter trail just crosses the river near the parking lot over a snow bridge, so the summer route may be a couple hundred metres longer. Nonetheless, the summer trail picks its way through the forest before meeting up with the winter trail. This main trail follows an old roadbed, gaining about a hundred metres of elevation over the first kilometre.

About one kilometre from the start, the trail splits. The direct route to the lake is to the right, where the trail departs from the road and heads into the trees. The trail loses 20-30 metres before eventually gaining the elevation back as you near the lake around kilometre 2.3. Just before the lake, the trail goes through a neat area that has some very large boulders scattered throughout a meadow. At the lake, the trail very clearly loops around to the left, we assume to connect back to where the trail split. We didn’t take that direction, through, because we wanted to gain a bit more elevation to get a better view of the area.

It took a bit of sleuthing to find the trail around Warspite Lake. There’s a few faint trails that head northwest (right) just before the lake, which eventually come together to follow the lakeshore - though about 5-10 metres upslope, and over deadfall and little creeks. The few hundred metres around the lake were the worst part of the hike.

Once we reached the other side of the lake, the trail was easy to follow through a big overgrown meadow. It was essentially a large avalanche slope but the grasses and shrubs were as tall as us! We continued about one kilometre beyond the lake to a large rockslide area. Here, we sat down and had some lunch and enjoyed the scenery. James had fun stacking rocks onto a cairn on the trail. The trail continues a few kilometres more up into Black Prince Cirque, but from this point there’s an elevation gain of about 400 metres - something we were definitely not up to today!

We turned around and retraced our steps back to the lake. However, deciding that the trail along the lake was not great, we picked our way along the lakeshore to get across. There were a few small streams to cross, but nothing that was deeper than a few centimetres. The lake seemed a bit low, so I’m not sure if it would be easy to do all the time, but today it was certainly less work than taking the trail!

From Warspite Lake, we continued down the trail we came up on rather than trying the looping section. I guess that will give us a reason to return another day!