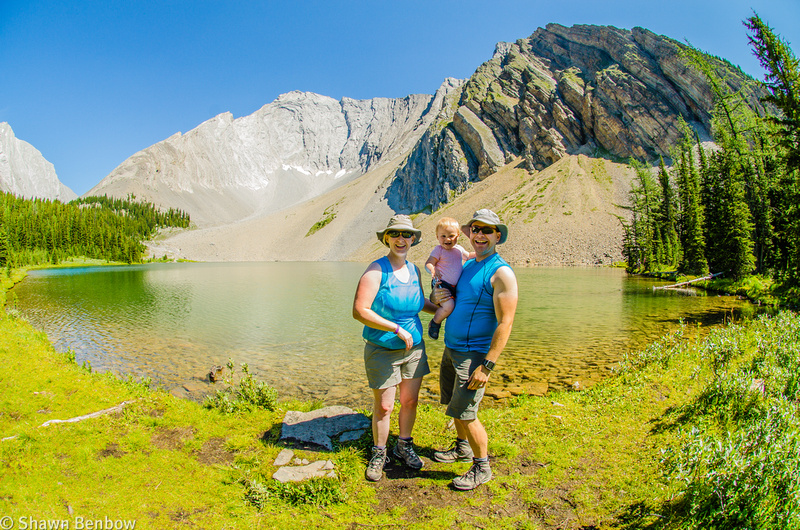 Jenn, James, and Shawn at Rummel Lake, with Mount Galatea in the background.

We headed down to Canmore to spend the August long weekend with Uncle Bruce in Canmore, and to hang out in the Rockies. Andrew had also made the trip from Calgary, so we arranged to meet in Kananaskis and do a hike to Rummel Lake.

There is no official trailhead or parking lot for Rummel Lake. Most people park on the side of the Smith-Dorrien/Spray Lakes Road at the Mount Shark turnoff, about 35 kilometres south of Canmore. The trail heads east from this junction and weaves between Spray Valley Provincial Park (on the north side) and Peter Lougheed Provincial Park (on the south side). Rummel Lake is right on the boundary of these two parks in Kananaskis Country.

Andrew brought a friend with him from Calgary, a guy named Jeff who is originally from the Netherlands, and had only been to the Rockies once before. James was happy to climb into his pack, and the rest of us tied up our boots and set off.

The trail steadily gains elevation as it rises up the eastern side of the Spray Valley. There are a few old forestry cutblocks where there are some good views of the Spray Lakes and Mount Shark area from the trail. After about two kilometres the trail enters the forest and steadily gains elevation toward the lake. Andrew even carried James for a while – James thought it was weird at first, but after he realized that Andrew was okay, James was okay with the ride.

There are fantastic views of Mount Galatea from the near side of Rummel Lake. We sat down and had some food and took photos while admiring the view.

Rummel Lake was named for Elizabeth Rummel, an early explorer and mountain guide who had a cabin near Mount Assiniboine, about 40 kilometres west of here. Rummel Lake is also a designated winter campground, but no camping is allowed in the summer.

After an hour or so we turned around and returned the way we came up. Overall we were out for about five hours.

Trip Length: 13.9km
Cumulative Ascent/Descent: ~400m (The elevation difference between the trailhead and the lake is about 400m. However, the GPS seemed to think there was almost 900m cumulative elevation gain, which seems high because the trail basically just trudged up the whole way – it doesn’t really roll or do anything that would explain the large elevation gain recorded.) 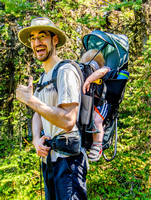 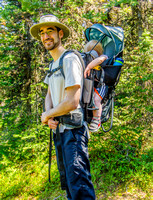