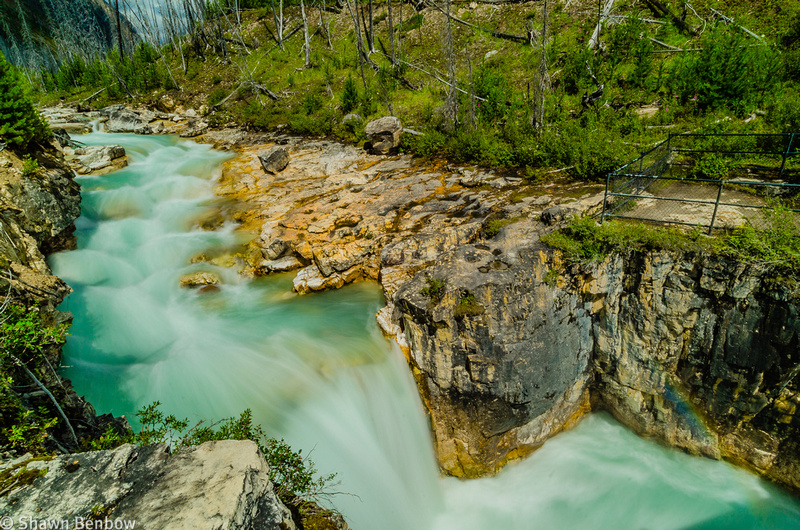 Tokumm Creek as it cascades into Marble Canyon.

We have driven past Marble Canyon many times, but have never stopped to explore this area. A few years ago when we Backpacked along the Rockwall trail, we ended up starting at the Marble Canyon trailhead because the bridge over the Vermilion River at the Paint Pots had washed away - however we really only saw the first two hundred metres or so of the canyon.

The trailhead is located on Highway 93 in Kootenay National Park, just into BC from Vermilion Pass. The parking lot is about 17 kilometres from Highway 1 at Castle Junction. We headed out from Canmore to the trailhead, about an hour drive.

Starting from the parking lot, the trail makes its way to the Vermilion River for a short time before heading north along the east side of Tokumm Creek. About a hundred metres from the confluence of these two watercourses, the trail crosses over Tokumm Creek at the very beginning of Marble Canyon. At this point, a trail forks west through the forest that leads to the Paint Pots, about 2.5 kilometres away - that’s the trail we took when we backpacked the Rockwall Trail. The Marble Canyon trail ascends a short section of stairs to gain some elevation to the top rim of Marble Canyon.

Over about a kilometre there are multiple bridges over the narrow canyon. The creek is probably 30-40 metres deep in places along the narrow canyon - it’s hard to see the water even when you stand on the bridges directly over the chasm! The views along the trail are quite good, and include Vermilion Peak and Stanley Peak to the south, Mount Whymper to the northeast, and the long ridge of Mount Oke to the northwest.

We wanted to show James Mount Whymper up close because his middle name, Edward, is after Edward Whymper, the first person to summit the Matterhorn in Switzerland in 1865. Whymper came to Canada in the early 1900s to climb, and is credited with the first ascents of Mount Whymper and Stanley Peak in this area in 1901.

The trail continues for about a kilometre. There are trails on both sides of the canyon for much of the distance, connected by the surprising number of bridges. At the north end of the trail, there’s a bridge over the impressive falls where Tokumm Creek drops into Marble Canyon. We spent some time taking photos around this area while James chased a squirrel along the trail and over the bridge.

Just a few metres from the last bridge there’s a pair of Parks Canada’s Red Chairs. We took a few minutes to relax on the chairs and take in the view of Stanley Peak and Vermilion Peak from the chairs.

Finally we decided it was time to head back, so we retraced our steps back to the parking lot. 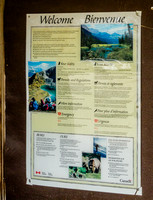