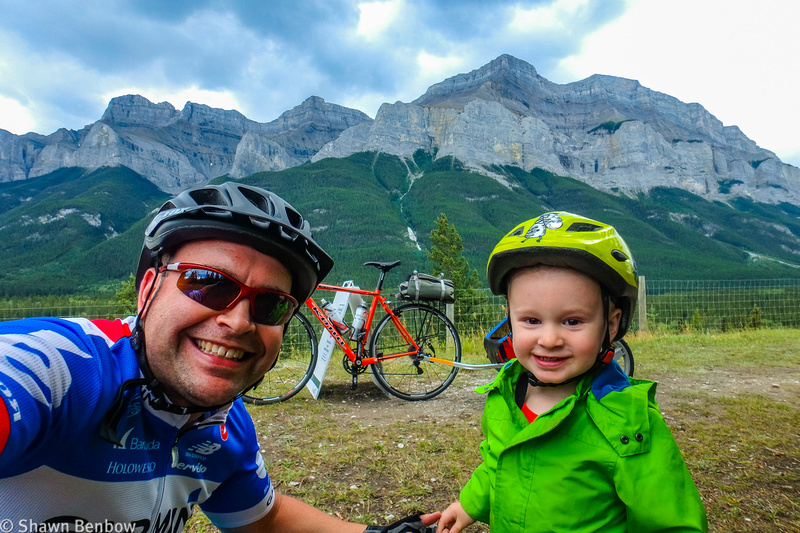 Shawn and James stopped to take in the view of Mount Rundle from the rest area.


We wanted to cycle a bit more of the Legacy Trail than the normal 50km we do from Canmore to Banff and back, so Jenn drove Shawn and James to the Mount Norquay Road at the Trans-Canada Highway. So instead of starting in Canmore, we started at the bottom of the Mount Norquay Hill.

We began by heading west from Banff, on the portion of the Legacy Trail that we had never been on before. Almost as soon as we started, it began to rain! Luckily we brought along jackets to keep the rain off. Fortunately the rain only lasted 10 minutes or so, and the weather improved after that!

At the Bow Valley Parkway interchange at Highway 1, the Legacy Trail abruptly ends on the interchange ramp. We took the Bow Valley Parkway up to the entrance sign, took a few photos, and then headed back east. Between the Bow Valley Parkway and Banff the trail goes in and out of the wildlife exclusion fence beside Highway 1 a couple of times - both times you need to dismount to open and close the gate as you ride through. Once in Banff, there's no obvious signage on how to continue to Canmore. We weaved along some residential streets until we got to Banff Avenue where the Legacy Trail begins again on the way to Canmore.

Between Banff and Canmore we stopped at the rest area and took in some views of Mount Rundle, and sat in Parks Canada's Red Chairs. It looked like the weather might blow in some rain again, so we didn't spend too much time before making the final 10 kilometres back to Canmore. 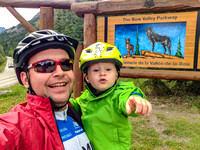