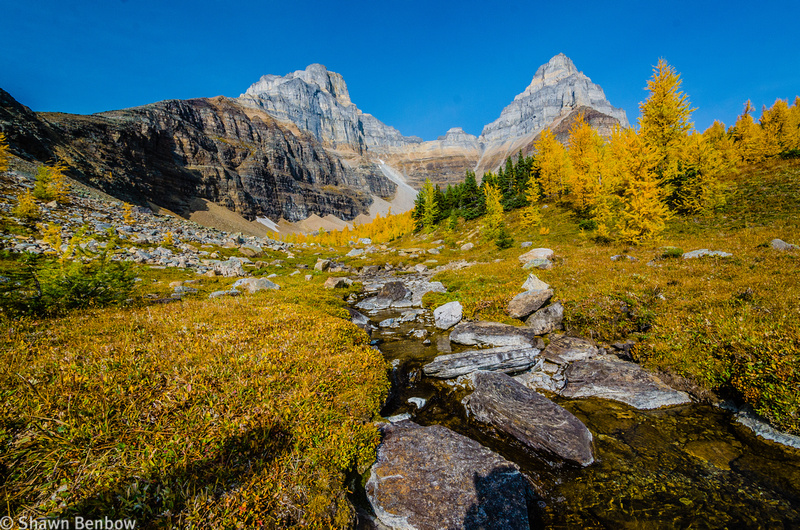 I have wanted to do the Larch Valley hike for a while, but we’ve never gotten around to it. So this fall we decided to make it happen. The Morraine Lake and Paradise Valley always has a mandatory minimum 4 person hiking group policy from early August to late September due to the number of bears in the area. I think statistically very few groups of 4 have ever been attacked by a bear, even if surprised by the people. That’s fine, but we needed to find a couple more people.

Thankfully, our friend Andrew was back in Alberta after a couple years in Ontario for school, and he wanted to come along. His dad Ivan joined us; Ivan couldn’t remember how many times he had done that hike, but was happy to come along as well. Carolyn, a co-worker of mine who had (coincidentally) also spent a couple years in school in Ontario, wanted to join us as well.

A couple days before our planned trip, I read with dread the yearly article in the Calgary Herald. The article noted in detail how fantastic the Larch Valley area was, and how busy it will be, and then noted that even though the Larch Valley was spectacular you should go somewhere else. I’m sure that the article would have the opposite effect, and the trail would be even busier. So, we planned to arrive at the trailhead by 9am on Saturday.

Good thing we left early, because we got the last parking stall at the Paradise Creek Trailhead parking lot. We had two cars so we could leave one at Paradise Creek for the return, and we all piled into the other so we could drive up and start our hike at Morraine Lake. We got one of the last parking spots at Morraine Lake. Later on, we heard that people were parking on the road as far away as 2 kilometres from the Morraine Lake parking lot throughout the day.

We began the ascent past the Morraine Lake lodge. The first few kilometres gained a fair amount of elevation, but the trail is wide, well defined, and not at all challenging. Slightly past the 3km mark we took a detour on a faint trail heading west along Eiffel Ridge. From there, we ascended an extra 100m or so, and got a very nice view of Wenkchemna Pass and the western end of the Valley of the Ten Peaks. We descended to the north, crossed a small creek, and rejoined the Larch Valley Trail near the Minnestimma Lakes.

After stopping to have some snacks, we continued up the switchbacks to gain the final 200m to Sentinel Pass at 2611m. I have never before seen so many people at a pass so high up. Although the trail was very crowded and there were literally hundreds of people, it really wasn't too bad. It probably helped that we started early enough that everyone was going up when we were on the trail. It probably gets really crazy in the early afternoon when people are going up and down at the same time - especially between the Minnestimma Lakes and Sentinel Pass where the trail is really only one person wide.

We stopped for a few minutes at Sentinel Pass with all the other people to take our photos and enjoy the view north and south. Then we dropped into Paradise Valley to the north, and started the descent on the Sentinel Pass Trail. The trail on the north side of the pass isn't nearly as nice or well defined. There must have been a 200m drop before the trail really existed; it was basically boulder hopping for a kilometre. Reaching the junction with the Paradise Valley Trail, we stopped again for another snack before continuing on into Horseshoe Meadows.

Descending into and across Horseshoe meadows was very pretty, and there are a couple tributaries to Paradise Creek that provided good photographic opportunities, but the highlight was the Giant Steps. Jenn and I had been there a few years prior, and were excited to return. They didn't disappoint, as this area was as spectacular as ever. In fact, on our approach to the Giant Steps, we witnessed a large rockfall off of The Mitre. Unfortunately we were in the trees and didn't get a good photo opportunity, but the dust cloud that resulted obscured the views up for a couple minutes.

At the Giant Steps, we spend a good half hour or so taking photos, refilling our water, and snacking. It's too bad the Giant Steps are so far from the road, this area must be very impressive in the winter - but I'm not sure it would be realistic to ski or snowshoe there in the winter - it would be about a 25 kilometre round trip from the parking lot.
We made our way back to the Sentinel Pass Junction before heading along the Paradise Valley Trail toward Lake Annette. On the way we crossed a rockfall area on the north side of Mount Temple. We stopped for a few minutes at Lake Annette to enjoy the views of this beautiful Lake. We have now been to Lake Annette in three seasons - summer, winter, and now fall. It's beautiful all the time, tucked away on the north slopes of Mount Temple.

The remaining few kilometres are on a rather boring trail that crosses Paradise Creek several times.