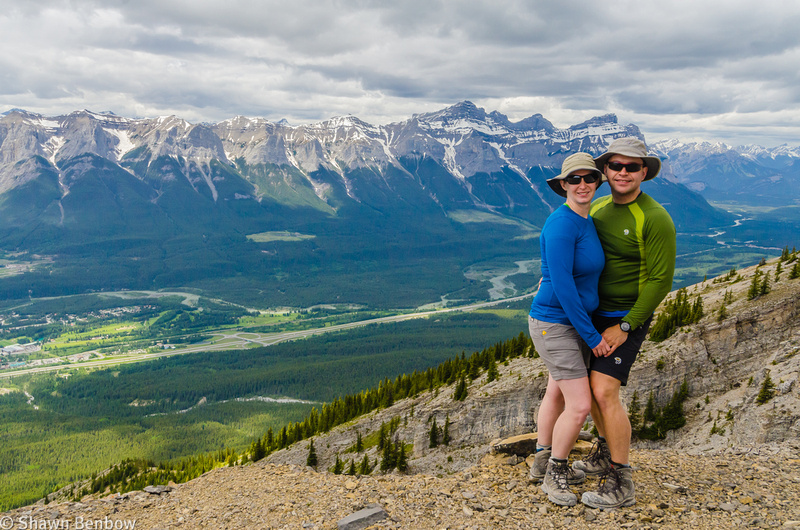 Jenn and Shawn in front of the Bow Valley and Mount Rundle, from Mount Lady Macdonald

Our first significant dayhike of the season was to the Mount Lady Macdonald Teahouse and just beyond. Taking into consideration the previous winter’s snowfall and wet June, we chose this hike because it was on a sunny slope and it was obviously clear by looking at it from Canmore.

The trail begins at Cougar Creek in northern Canmore, and follows the west side of the creek for about a kilometre gaining minimal elevation. There are a couple trails that split off, but the junction to the Lady Macdonald Trail is marked by typical Kananaskis Country signage.

The trail gains significant elevation over a relatively short distance, but the trail is not technical or exposed. We did lose the trail over a boulder field maybe one kilometre from the Teahouse. It seems that through this area there are several routes marked out with cairns and flagging – but as long as you continue going up you’ll probably be okay.

The Teahouse isn’t actually complete, it was a failed business attempt to build and operate a teahouse 700 vertical metres above Canmore. They completed a helipad, poured concrete foundations and built the first level and decking for the Teahouse before abandoning the project. If it were a bit closer/lower and not such a strenuous hike, it may have been worth it, but I can’t see how anyone thought that would be a money-making venture!

Some dark clouds and rain were moving in from the west, so we quickly ventured partway up the scree slopes beyond the Teahouse, but as the visibility decreased and the rain moved across the valley, we turned around and made our descent. The summit will be for another day when the weather is better.