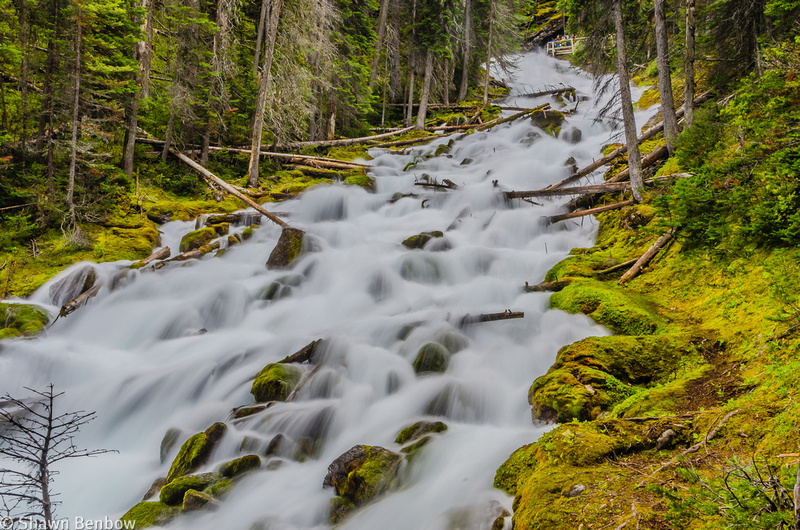 A lazy morning and the required four hour drive back to Edmonton necessitated a half-day hike. Karst Springs was a destination we had picked to do with some friends the previous year, but the plan didn’t work out. So, we set off 50km south of Canmore on Highway 742, the Smith-Dorrien/Spray Lakes Road (What other road has three names?). After all, we had been in Canmore for three days and our car hadn’t been covered in white dust from the Spray Lakes Road yet.

The trailhead is at Mount Shark Day Use Area, a multi-purpose trailhead/parking lot. To get there you take the Mount Shark/Mt. Engadine Lodge turnoff a couple kilometres south of Spray Lake. In winter, the Mount Shark is a cross-country ski destination. They have a number of signed ski loops with varying distances and difficulties In summer you can see the cutlines and the signage for the ski trails, but the summer trail (an old road) is very obvious, and well signed.

The road undulates but is relatively flat for the first three and a half kilometres. Take a side trail that drops to the left down toward Watridge Lake, which is in a low point near the boundary of Spray Valley Provincial Park and Banff National Park. Watridge Lake isn’t anything spectacular, but it had a decent view of Mount Morrison, Mount Tuner, and Cone Mountain.

Passing by Watridge Lake, the trail travels along a nice set of boardwalks for a hundred metres or so. Beyond, the trail gains about 150m in about one kilometre to the Karst Spring. A karst is a porous rock formation that collect rain and meltwater from the surface and carries it through the rock bed. When the underground river system finds an outlet, the water flows out of the karst and looks like a spring. Hence the name.

This would be a great trip for a family – it’s mostly flat on an old road, with a nice lake and spring at the end. You can also cycle to Watridge Lake and then walk to Karst Spring, which a couple families did while we were there.