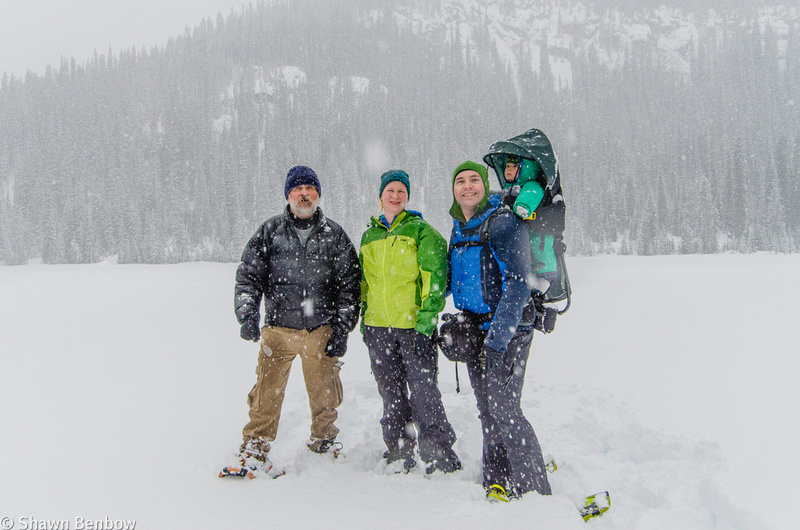 On a warm February Saturday, we ventured south of Canmore in search of some snow. Thankfully, there was a decent base around the Burstall/Chester area, and it was even snowing when we arrived at the Burstall Pass parking lot, about 45km south of Canmore on the Smith-Dorren/Spray Lakes Road. Uncle Bruce joined us for the snowshoe around Hogarth Lakes.

There was a nice soft snowpack that was fairly hard packed along the trail. We started off from the trailhead in a counter-clockwise direction. The main trail is a loop along three lakes/marshy areas that freeze up in the winter. There’s no summer trail along this route as it would likely be too wet and muddy. Going counter-clockwise, it’s slightly undulating terrain for the first three kilometres before rising over a lump on the return.

It started snowing as we were snowshoeing along, and the white fluffy flakes were all over us by the time we got back to the trailhead. James spent a few minutes trying to play with some snowballs that Shawn made, but his little mitts didn’t have any thumb holes, so it was hard for him to pick them up!

The Hogarth Lakes snowshoe loop is an easy snowshoe route that provides some winter scenery with minimal elevation gain and no avalanche exposure. 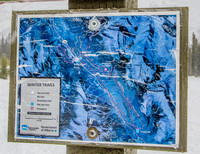